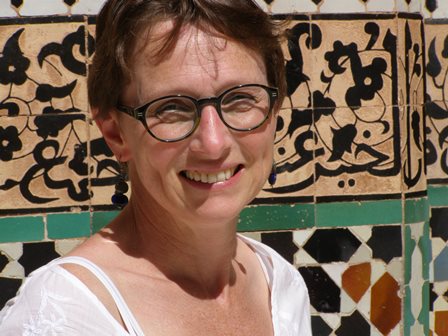 This article was written by the Christian Information Platform located in the Netherlands, following their interview with Berdine van den Toren.

“We began each lesson with zinging and dancing”

War and violence. In the Central African Republic is this an unavoidable reality of life. Also in the time period in which Berdine and her husband were living there. “ But even then, amidst al the tension there was a living church” explains Berdine. “there is hope. My lessons begin would never begin before we had all sang and danced.” Just recently, this same woman has rolled up her sleeves, ready to join the Dutch  3xM Board in continuing the work of spreading the gospel.

When did the gospel come alive in your own life?

“I grew up in a Christian family with two very devoted Christian parents. Even as a young girl I began to ponder some of the difficult questions over God and all the suffering in the world. At school I was told  that I shouldn’t ask those  questions.  But my search for answers was just beginning. A girlfriend of my regularly attended youth meetings organized by Youth for Christ and invited me to join her. In these meetings God was spoken of as one who loves us and not only as one ready to punish. Someone spoke at a meeting about the work of Open Doors. Telling of people willing to give up their lives for their faith. That woke me up. Since then my attitude about life and what I believe has dramatically changed. My faith in Christ has grown through bible studies and a 3 year study at a bible school.”

Later on Berdine met her husband Benno. At that time he was studying theology. “It was soon clear that God was calling us to the mission field, and we were both ready to go.” An advertisement about a mission opportunity in the Central African Republic (CAR) captured their heart. “At first we didn’t take the opportunity, but six months later we did.”

What did you do  in CAR?

“My husband and I both taught at a school for Theology in French speaking Africa. I worked at a bible school for women and taught a lot about raining children. One of the students at that time is now married with a bishop and now gives education on the issue of trauma therapy. She works directly with women who have been raped in time of war and who’s lives have been devastated.  Other women we taught have become leaders and are now training other men and women. That is wonderful to see,”

How did you experience everyday life in CAR?

“I remember a beautiful country with exceptionally hospitable people. Unfortunately I also remember that CAR is a country torn by poverty and mismanagement. A few different churches remained standing in spite of the war. Even in the midst of all the tension, the church was alive. Believers kept courage with the thought: ‘whatever happens, we cannot fall out of Gods hand’. The hope was always showing . My classes would never begin until we were finished singing and dancing. The future in which the righteous will celebrate and God will wipe our tears away, brings hoop and joy. Despite of the situation.

What have you learned from your time in CAR?

“My faith has been enriched throughout the many beautiful and difficult times. I have struggled with overwhelming  doubts. How can I trust God while there is so much injustice taking place around me? When is it enough? For years I have struggled with these questions. What had held on to me through these times is that God has given his one and only son. He chose death in order to save mankind. This brings incredible n peace in moments of doubt.

You are now part of the board for 3xM, an organization believing strongly in the power of television. How have you experienced the influence of television while living in CAR?

Many people own a television in Africa, certainly in the cities. The TV’s are left on all day. In many cultures the television is turned off during visits. In Africa this is not so. There, the TV functions almost like a radio, always on in the background contributing to a lively atmosphere. The difference is of course that we are able to remember images for much longer. The Christians are able to use this medium, for example  in creating awareness about HIV/aids. During the period of time I was studying in Oxford and busy with the subject of HIV, I came in contact with a 3xM partner in Ivory Coast. There the gospel is also being told while at the same time creating awareness about social problems. Because it is a taboo issue in society, the television is influencing its viewers to address the issue.

Berdine worked in CAR for over 8 years. Together with her husband she now lives since 2014 in the Netherlands, after living 9 years in Oxford. She is active as a board member for 3xM, and organization bringing the gospel to people in inaccessible countries through means of television.